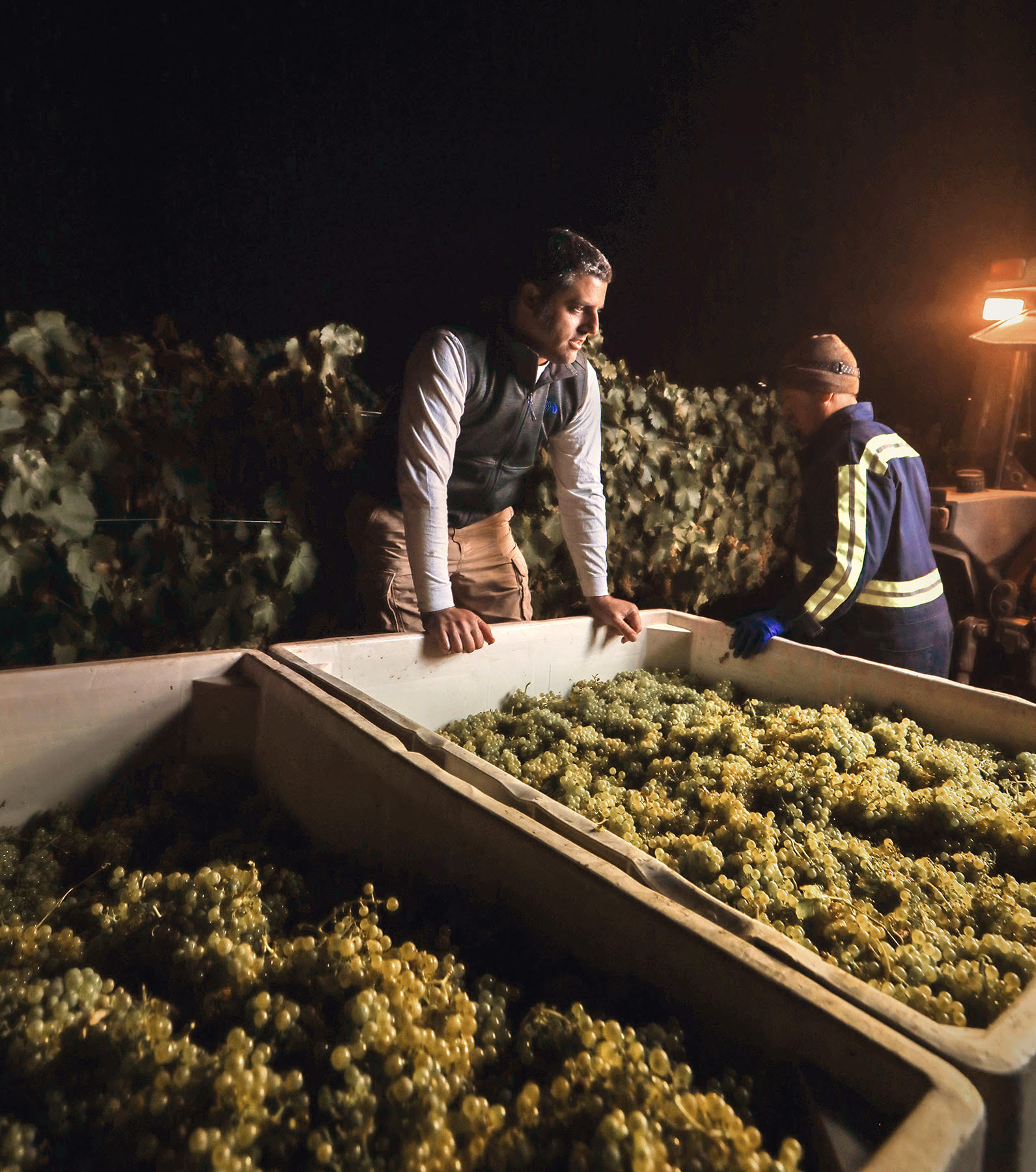 West Pinnacles, California, August 24, 2021 – Veteran winemaker Bill Brosseau marked the start of his 25th professional harvest on Monday, August 23rd for the 2021 vintage of Brosseau Wines. Harvested at night, Chardonnay grapes were the first to be hand-cut from the vines of Brosseau Vineyard, his family’s certified organic estate in Monterey County’s Chalone Appellation. Brosseau Vineyard is celebrating 10 years of organic certification and was the first to receive this distinguished certification in the Chalone Appellation back in 2011.

Bill’s experience with winegrowing and winemaking extends well beyond his 25 professional harvests. His parents, Jon and Jan Brosseau, fell in love with the remote region near Pinnacles National Park and dreamed of following in the footsteps of Richard Graff, Chalone Vineyard co-founder and family friend. In the mid-1970s, they invested in the land that is now Brosseau Vineyard, planting the first vines in 1980. As a child, Bill spent the weekdays in the Bay Area and the weekends completely immersed in the vineyard life. “I just loved the adventure of creating wine, but also working on the vines themselves, or just riding my dirt-bike through the vineyard,” he remembers.

Bill began his professional winemaking journey with hands-on experience and studies at the UC Davis Viticulture and Enology program, completing three harvests before graduation. Following graduation, Bill began working for the Jensens at Testarossa Winery in 2000 and was promoted to winemaker at the Pinot Noir-specialized brand in 2003. Bill’s dual expertise in the vineyard and the cellar allows him to holistically fine-tune wines at every step of the growing and winemaking cycle.

Today, Bill is the Director of Winemaking at Testarossa, Winemaker for Brosseau Wines, and Wine Consultant for Brosseau Wine Design, extending his knowledge and experience to some of California’s most revered wine brands and private estates in California’s Central Coast. Over the last 25 years, Bill’s philosophy of organic farming and minimalistic winemaking approach has helped him become one of California’s most respected and awarded Chardonnay and Pinot Noir artisans, garnering more than one thousand, 90+ point reviews.

As the 2021 harvest comes into full swing, Bill is celebrating his past successes with his eyes on the future. “Looking back at 25 harvests, I could not have muscled through the challenge of each harvest if it were not for the continued love and support of my wife, my children, my parents, my winemaking team, and all of my wine friends. I am so fortunate to have been part of winegrowing and winemaking in the Central Coast. It offers some of the most beautiful and iconic sites in the world, yet still relatively undiscovered. I look forward to the steady pursuit of quality enhancements and helping the world discover our beautiful terroir.” Phil Woodward, Co-founder and CEO of Chalone Wine Group, reflects on Bill’s career: “I have enjoyed Bill’s wines from his very first vintage of Chalone Appellation wines. Bill, like Dick Graff, captures the essence of the Chalone terroir, especially in his Chardonnays and Pinot Noirs.”

Brosseau Wines is a boutique winery and estate vineyard in the Chalone Appellation, West Pinnacles, California. All wines are estate grown and made by veteran winemaker Bill Brosseau, who has produced twenty-five professional harvests as winemaker at his family’s Brosseau Vineyard, and twenty at Testarossa Winery, achieving over one thousand, 90+ point reviews. The winery focuses on producing small lots of Chardonnay and Pinot Noir, including old vines lots dating back to 1980. Very small allocations of Syrah, Chenin Blanc and Grenache Rosé are produced for special release. Learn more about Brosseau Wines at brosseauwines.com.